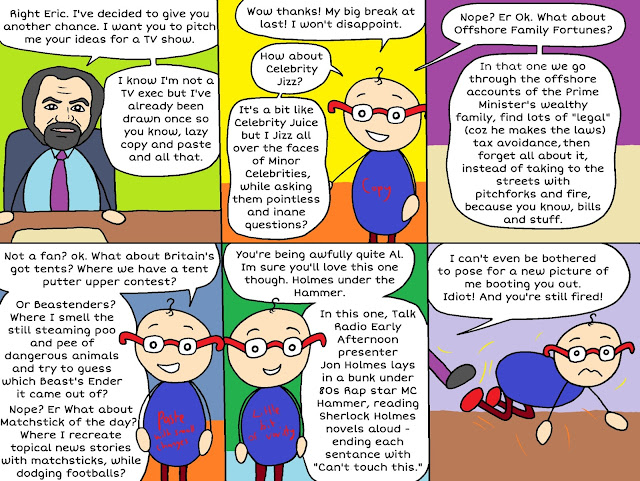 Lord Sugar: "Right Eric I've decided to give you another chance. I want you to pitch me your ideas for a TV show. I know I'm not a TV exec but I've already been drawn once so you know, copy and paste and all that."

Eric: "Nope? Er Ok. What about Offshore Family Fortunes? In that one we go through the offshore accounts of the Prime Minister's wealthy family, find lots of "legal" (coz he makes the rules) tax avoidance, then forget all about it, instead of taking to the streets with pitchforks and fire, because you know, bills and stuff."

Eric: "Not a fan? Ok What about Britain's Got Tents? Where we have a tent putter upper contest? Or Beastenders? Where I smell the still steaming poo and pee of dangerous animals and try to guess which Beast's Ender it came out of? Nope? Er What about Matchstick of the Day? Where I recreate topical news stories with matchsticks, while dodging footballs."

Eric: "You're being awfully quite Al. I'm sure you'll love this one though. Holmes under the Hammer. In this one Talk Radio early afternoon presenter Jon Holmes lays in a bunk under 80's Rap star MC Hammer, reading Sherlock Holmes novels out loud - ending each sentence with "Can't touch this."

Lord Sugar: "I can't even be bothered to pose for a new picture of me booting you out. Idiot! And you're still fired!"
Posted by Unknown at 07:24

Email ThisBlogThis!Share to TwitterShare to FacebookShare to Pinterest
Labels: Eric

Feel free to buy me a Doughnut but only if you want to. No pressure.

Cup a load of books

Promote your Page too

Cup a load of merchandise